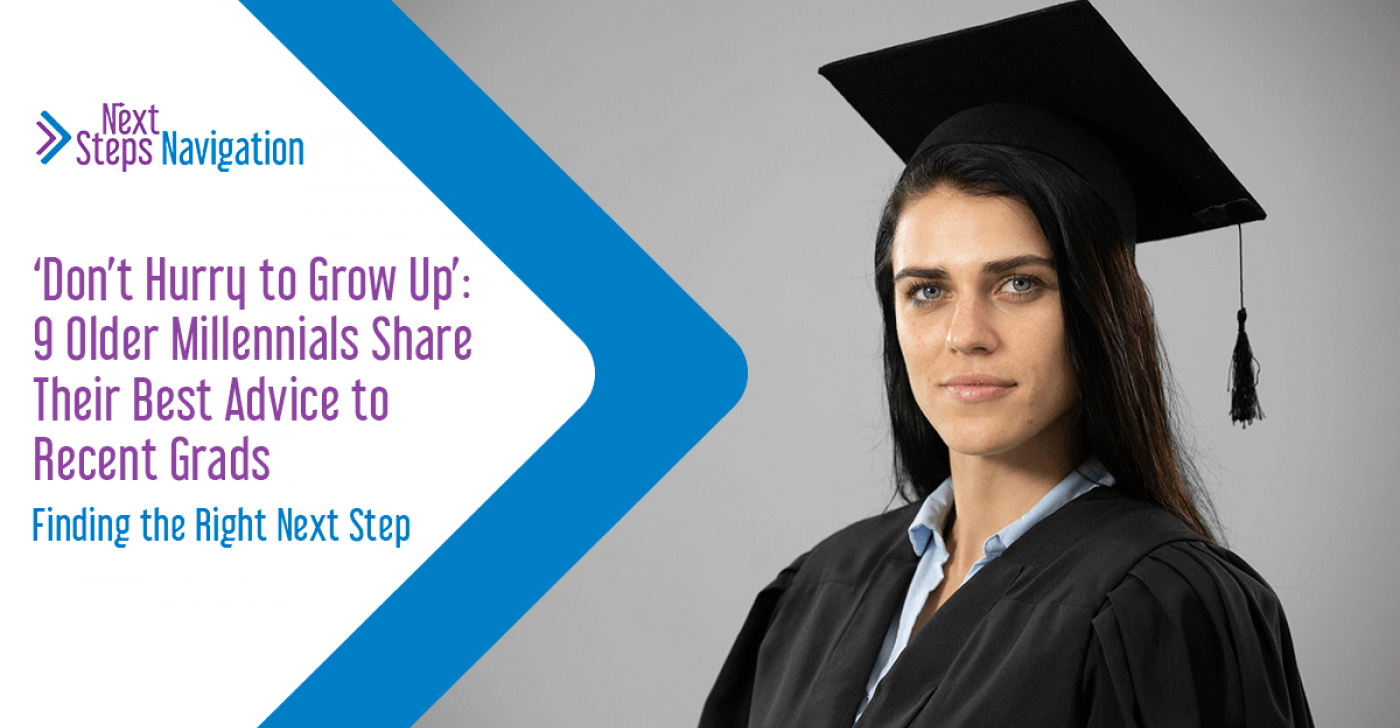 For example, nearly half wish they had chosen a different career path when they started out, according to a recent survey of 1,000 U.S. adults ages 33 to 40, conducted by The Harris Poll on behalf of CNBC Make It. But the data suggests the decisions they’ve made in the years since have moved them closer to their goals: A majority, 68%, are satisfied with their careers now.

Despite all the challenges, most are content with how their lives turned out, according to the survey, thanks to time and perspective.

We spoke with nine older millennials about what they wish they had known in their 20s and the advice they would give to recent grads today.

Don’t hurry to grow up

In Denver, Stephanie McCay, 36, says her biggest regret is not taking more time and risks while she was young, like trying to make it in New York City after school. She was hired right out of college to work for an architecture firm near her hometown, spent the last 15 years building the communications department and is now its director.

She advises new grads to take their time to explore their options and the world: “Don’t hurry to grow up,” McCay says. “All of us are in this mindset of ‘Get out of college and get a job.’ Then you get into it and think, ‘Why did I rush to enter the workforce?’”

She wishes she had taken more time to travel before being tied to a job with limited paid time off. For new grads with the means to do so, “if there’s an opportunity to travel or volunteer for a year, take it.”

Measure your success beyond work

Kristen Alfenito went to college for musical theater but has never been able to work in the field after she dropped out of college because of a cancer diagnosis. In the 16 years since, she has held odd jobs in food service and retail and currently works as a cashier at a bakery.

But she and her partner recently moved from Los Angeles to Morgantown, West Virginia, where the 35-year-old Alfenito hopes she can afford to pay off her loans and go back to school to become a theater educator. “What I was passionate about at 19, I am still passionate about today,” she says.

Her best advice for young professionals today: “I cannot stress enough that your job should not be how you measure your success. Happiness is. Fulfillment is. Your degree may get your foot in the door somewhere, but don’t blame yourself if you don’t immediately fall into your dream job.”

“Sometimes it takes years to figure out what it is that you really want to do,” she adds. “And if you find yourself less interested in that career as you grow and change and age, let it happen.”

Lee Ruark graduated with a history degree in 2007 and spent the next three years figuring out his options — the military, law school or law enforcement. He eventually fell into substitute teaching and got certified to teach high-school science full time.

Ruark, now 35 and living in Jeffersonville, Vermont, remembers the stress of feeling directionless right after school and thinking he was falling behind while his friends moved ahead.

“What’s interesting is, after talking about it with them, I realized all my friends had the same anxieties about perceiving others’ successes,” he says.

He hopes new grads today understand their college major and grades won’t define their career prospects forever. While those qualifications may get your resume into the hiring manager’s hands “once you’re hired, it’s more about being dependable and hardworking,” he says.

Celine Crestin, 39, started her career working in retail management, then management for the federal government, but felt unfulfilled and struggled to pay off her student loans for a degree she says wasn’t worth it. “Then I became a single parent and couldn’t make risky career moves as I had little to no savings and a lot of debt,” she says.

But in 2017, she was able to make the jump to become a real estate agent, and after working two jobs for two years to make ends meet, she’s much happier in her second career in Buda, Texas.

She advises new grads approach decisions with a similar openness: “Don’t waste time worrying about all the ‘what ifs’ in life, but rather focus on what makes you happy and leaves you fulfilled,” Crestin says. “Take the opportunity to try a few things out and never be afraid of change. Sometimes you have to take the risk or lose the chance.”

Kristen Conley, a 40-year-old health worker in St. Petersburg, Florida, was dissatisfied with her work in medical imaging until she returned to school in 2017 to get her medical technology license.

Now, she loves the work of her field, which she says is “wide open” and growing quickly with the aging population. Her advice to young professionals today is to think about specialties within their interests that will continue to be in high-demand.

Sarah Augustynek, 39, agrees. She has spent her career working as an attorney and compliance professional in higher education in Buffalo, New York. She advises young people today to approach their educations and careers as an investment: “Look at what you are aspiring to, potential salaries, and view college as an investment. Some industries don’t support financing an Ivy League education.”

When researching a career, “be careful to look at future market projects in terms of which industries are growing and which are shrinking,” she adds.

Weigh the costs and opportunities of a graduate degree

Brad Walters, 34, studied policy in college, worked in education for two years and then went to law school. He left with $200,000 in student loans and doesn’t think it was worth it.

His biggest piece of advice: Don’t go to law school. “Or, to state things a bit more diplomatically: Most people who go to law school shouldn’t,” he says. Although he thought it would be a good fit based on his personality and believed it would offer a broad range of skills, he found the field to be heavily regulated with challenging schedules and few opportunities to move ahead.

After getting married, having kids and reevaluating his career, he left law and returned to education.

He advises those considering law school to think long and hard about the pricey and time-consuming decision. At its peak, he was paying $4,000 a month toward his student debt. He also says that despite the stigma and myth of young job-hoppers, changing jobs has been the best way for him to advance in his career.

Learn from, but don’t copy, your mentors

He says mentors assured him it was a “safe gamble” and that his career would at least be “stable enough that you can have a home and a family.” Five years out, however, he feels those goals are out of reach due to his high debt and modest salary.

Which brings him to his biggest piece of advice to young professionals: “Don’t over-rely on everyone else to be your assurances.” He says mentors and teachers have the best intentions for their students, but may have experienced things differently based on the economy and other social circumstances.

“Don’t copy your mentors’ advice word for word,” Pederzani says. “Learn from them instead, and adapt their advice to today’s world — the world you live in.”

For example, he didn’t get into his top picks for college but ended up with a solid education from Cal Poly. In the Navy, he got his eighth choice for his first assignment, on a submarine, but enjoyed himself more than some peers who got their first choice. After the Navy, he returned to earn a doctorate degree and was accepted into only the University of Colorado in Boulder, and though he was only accepted for one fellowship, it ended up being with NASA.

Today, Guerrant is an aerospace engineer working on a NASA-funded commercial moon lander and a Navy reservist with the Office of Naval Research. He says he loves his career, couldn’t see himself doing anything else and intends to retire with his current employer.

He advises those in school to pick a major that will lead them to a career they’ll enjoy. While he went on to earn his doctorate, he says he did so because he loves his area of research, but it didn’t make much financial sense: “I had a fantastic time getting mine and wouldn’t trade it. I’d just be richer if I hadn’t,” Guerrant says.